It was long known that Pompeii grew grapes and made wine. At the end of the 20th Century, they were finally able to determine exactly what vines they grew, until that fateful warm August day in 79 AD, when Vesuvius obliterated Pompeii and Herculaneum.

Some we know, some, we don't know well. Greco, Fiano, Aglianico, Piedirosso, Sciascinoso, Codi di Volpe, Capronetta, and Falanghina all were grown in Pompeii.

We know how they made the wine as well. Grape presses, drained into large terra-cotta vats buried up to their necks in the ground to remain cool and temperature stable.  Underground "cantina" for aging and storage. We know they used "passito" and "ripasso" by adding dried grapes to the fresh must. 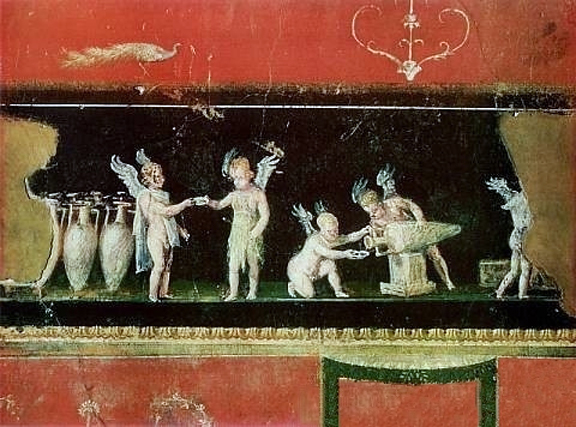 Their densities were literally twice what we consider usual and optimal today. Almost 3,000 vines per acre, compared with the usual 1500 or so today. This, of course, stressed the vines and forced them to compete, creating better quality grapes.

The team found the most logical choice to make the wine from the Pompeii vineyard. Piero Mastroberardino.  He is the tenth generation of his family over the last three hundred plus years to make wine here.

Now, the major difference between wine then and today is the actual taste. Wine was shipped in amphorae lined with Pine resin to keep it water tight. Mastroberardino tried this once.  The result was, in a word, undrinkable to the modern palate.  They also used to dilute their wine and infuse the wine with herbs and spices, not just for the flavor, but also the Romans knew that the alcohol would steep the medicinal qualities out of the herbs.  For 2010, the Mastroberardino team is looking to replicate these medicinal infusions with the wines they make literally in Pompeii.

Piero Mastroberardino makes one signature wine from the Pompeii vineyards, which grow literally on the grounds of the same now ruined villas where they found the remains of ancient vineyards.  The wine is called "Villa die Misteri" after the famous Pompeiian villa, although the vineyard itself is in the House of the Mosaic.  The House of the Mosaic was originally a wine producing estate in Roman times.  The project now has ten hectares (3 acres) under cultivation.Piedirosso and Sciascinoso are the two varieties for the wine, which are the two that do the best in the field trials over the last decade;  which is made as close as possible to Roman standards.  Some standards, however, are not used.  The ancient Romans fermented the wine in the open top "doli" buried in the ground, so the occasional field mouse would fall on in. (Now, Pliny the Elder recommended that when you find a wine drowned mouse, you roast it!).

He describes this wine as "ruby red with strong density and concentration. The nose is very interesting because it has some spices like pepper, and red fruits like raspberries, strawberries and currants. These are typical of Pieirosso in the long maceration."

Yr Mst Hmbl & Obdt Svt here and the rest of y'all will just have to take his word for that. Only about 2500 bottles are made each year and are auctioned off to help fund the Pompeii wine project. None have yet found their way to the US for sale as far as my research can tell. The few in Europe fetch over $250 a bottle. Now, Piedirosso from the Naples region will make a nice substitute.