I don't want to hear any more WHINING about problems in Napa. Drunk Baboons??

OK, This one just begged to be blogged about. The UK's Daily Telegraph reported about a serious problem plaguing Groot Constantia winery. Drunk Tourists? Nah...Drunk Baboons!.What would they do in Napa if they had this issue?

Groot Constantia, in the heart of Cape Town's wine country, can deal with inebriated holidaymakers – but it is invading baboons which have developed a taste for its grapes that the wine makers are struggling with.

Each day, dozens of Cape Baboons gather to strip the ancient vines – the sauvignon blanc grapes are a particular favourite – before heading into the mountains to sleep. A few, who sample fallen fruit that has fermented in the sun, pass out and don't make it home. 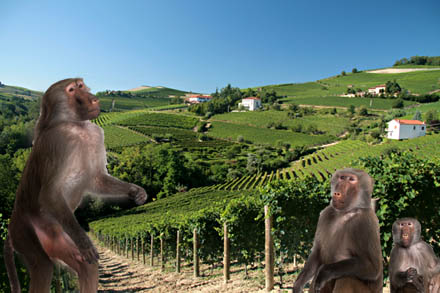 "They are not just eating our grapes, they are raiding our kitchens and ripping the thatch off the roofs. They are becoming increasingly bold and destructive," said Jean Naude, general manager at the vineyard, which is celebrating its 325th birthday this year. Guards banging sticks and waving plastic snakes have been deployed with only limited success, and not even a blast of a vuvuzela, the plastic horn made famous at the World Cup, seems to frighten them.

It is not just the vineyards in South Africa which are under siege, however, but also the exclusive neighbouring suburb of Constantia, home to famous residents including Earl Spencer, Wilbur Smith and Nelson Mandela.

Crisis meetings between animal welfare groups and traumatised locals are struggling to find a workable solution.

"Where there's a mountain, there's a baboon," said Justin O'Riain of the Baboon Research Unit at the University of Cape Town. "As we take up more and more of their land, the conflict increases."

The baboons lived in the mountains of Cape Town long before humans took up residence, but development has forced the unlikely neighbours into increasingly closer contact.

Before laws afforded baboons a protected status a decade ago, troublesome animals were regularly killed or maimed by home owners and farmers. Now around 20 full-time "baboon monitors" are employed to protect them and guide them away from residential areas. It has proved mission impossible. Last week, a 12 year old boy was left traumatised after confronting a troop who had broken into his family home.

Hearing noises from the kitchen, he went to investigate and found the beasts ransacking cupboards. When the child fled upstairs to find his babysitter, three males gave chase and surrounded him as he made a tearful phone call to his mother, while the animals pelted him with fruit.

"When he called me he was terrified. They had him surrounded," said the Constantia housewife, who did not wish to be identified.

Chickens, geese, peacocks and even a Great Dane dog have been killed in recent weeks by the marauding baboons - the males have huge and terrifying canine teeth. Roof tiles, electric fences, orchards and vegetables gardens have been trashed.

"Lunch parties in the garden are now just impossible," a homeowner complained. "It is so unrelaxing. Rather than chatting over our meal, we are looking over our shoulders and bolting the food as quickly as we can before it is stolen. We can't even leave a window open in summer. We are under siege."

In a concession to despairing residents, wildlife authorities have begun collaring baboons identified as "troublesome" and imposed a strict "three strikes" policy whereby animals which repeatedly break into homes are humanely destroyed.

Fourteen year-old William, a large male known officially as GOB03, who had terrorised the coastal suburb of Scarborough for as long as anyone can remember, was the first to fall foul of this controversial rule.

His death last month was greeted with outrage and jubilation in equal measure and dominated the letters pages of the local newspapers for weeks.

Meanwhile, For Sale signs are sprouting up in suburbs with baboon populations. Families which have lived in the same house for generations are giving up, moving away to get away from their animal tormentors.