Another "good thing": more White Burg at a reasonable price

As a rule, I'm usually not much of a fan of negociant wines. Maison Louis Jadot is an exception.  They bottle good wines always and great wines often.  They were the cause of the one and only time I lost my temper with a customer at my wine shop.  It was the height of the most recent anti-French wave, "Freedom fries" and "Freedom Toast" at IHOP.... Customer walks in and cancels a $1000 special order of French wine I had already bought for him.  No more French wine, he stated.  I said "look, I already OWN the wine, I paid for it, the French don't give a crap if you don't buy it. They sold it to a US broker, who sold it to an American distributor and I bought it FOR YOU..." "Sell it to somebody else. I only buy American wines now..."  "Well" I said "How about Maison Louis Jadot? They are 100% American owned, two sisters in New York City, both quite all US Amercians? You don't buy THEIR wine you hurt US citizens..." Long pause...."Well the wine is still French..." I threw the idiot out of my store, happily...

The Jadot Macon '08 is a nice wine. Green apple and pear on the nose. Clean palate, light but stiff acids. Not too warm, not at all flabby. OK so not huge on complexity but solid structure.  Heck, what do y'all want from a $10-12 bottle of BURGUNDY? Its good. Great, nah, but at this price kicks major butt on any California Chardonnay at the price point.

Easilly found in your local stores, having this tonight with roast chicken, potatos roasted in goose fat and aspargus...Nice pairing at a great price. 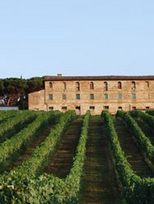